Here is part 2 of our best player at each uniform number. Enjoy!

11: The best player that wears number 11 is Ryan Zimmerman.
All Star, Gold Glove and Silver Slugger winner, I mean why wouldn’t he be the
best? Jimmy Rollins is also a good baseball player that wears number 11 so
let’s compare the two All-Stars. Rollins had more doubles (43-37), triples
(5-3), and more stolen bases (31-2). In fact he crushes in the stolen bases.
But Zimmerman has more hits (178-168), more runs scored (110-100), more RBI’s
(77-106), more homers (33-21), and a better average (.292-.250). They both had
fine defensive seasons and both won the Gold Glove. Both were All-Stars and you
have to give some credit to Jimmy Rollins, he had 21 homers in the leadoff
spot. 21. Ryan Zimmerman was also
more valuable to his team. Yes he is more valuable to the Nats then Rollins is
to the Phils. The Phillies have Chase Utley, Ryan Howard, Polanco, Ibanez,
Werth, and Halladay and they would be stacked even without Rollins. The Nats do
have players but without Zimmerman, they would be nothing at all. They have Dunn
and Marquis but Zimmerman is the best. Therefore, he is the better of the two. 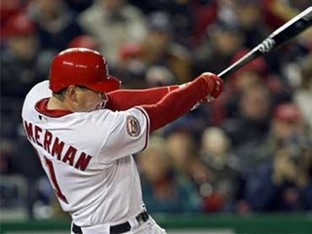 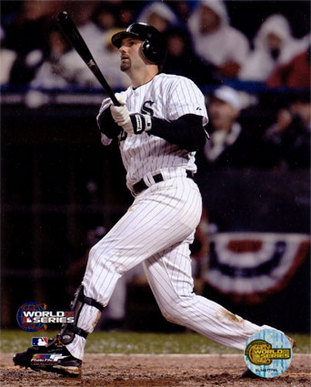 17: Lance Berkman or Todd Helton? They are both good, but
who is better and who has recently been better. According to us, it is Todd
Helton. Last year Helton hit .325 compared to Berkman’s .274 but he was
injured. Now if you step back to 2008 Berkman hit .312. That year he also hit 29
homers which were almost 2 times as much as Helton’s 15. In 09 he hit 25 which are
still 10 more than Helton. Helton has 6 more RBI’s than Berkman had in 09, but
was 20 less than what Lance hit in 08. They are pretty even right now is Helton’s
defense. Personally I thought that Helton should have won the Gold Glove. That
is what wins over Berkman who is starting to become a DH-type hitter. 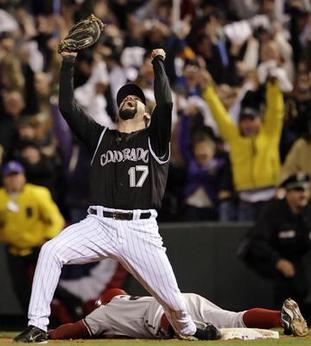 18: Johnny Damon against Geovany Soto. Seems pretty easy to
choose Johnny Damon. Right? It is easy to say Damon is a better offensive
player, but Soto is a better defensive player especially because Damon has a
horrible arm and cannot play defensive making it easy to say Soto is better
when it comes to playing in the field. But Damon is a way better offensive
player, perhaps by such a margin that he is a better overall player. Let’s see.
Damon is obviously worse defensively. Damon hit a decent .282 which was WAY
higher than Soto’s mere .218. Damon had more than 2 times as many homers as
Soto (24-11) and had nearly 2 times as many doubles than Soto. Clearly, Damon is
better. 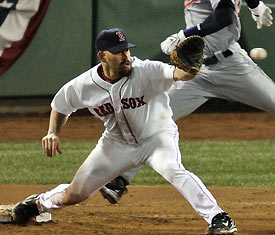 Thank you, thank you. Any comments, questions or disagreements?
Feel free to comment. 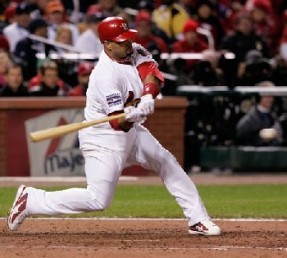 So, let’s get started!

Joe Mauer had an amazing season. He led the league in batting average, slugging, on-base percentage, and on-base+slugging. Do I need to say more?
King Albert is amazing. He hit 30 homers in the first half of the year and ended with 47. He was an early favorite to get a triple crown. See why he deserved it?

CY Young Award: AL: Zack Grienke, NL: Tim Lincecum
Zack Grienke’s ERA was under 2.30 and he had 216 strikeouts. Enough said. It is an obvious winner
Did Tim Lincecum deserve the CY Young? Well we don’t know and we don’t think so but this is something we can allllllll agree on. He had a very good season. 262 K’s and an ERA under 3. Pretty dang good for someone who does something illegal.

Rookie of the Year: AL: Andrew Bailey, NL: Chris Coghlan
In the NL Coghlan would be the unanimous c

hoice if not for JA Happ or Tommy Hanson. Chris Coghlan had the most hits after the all star break with 100+ hit. He hit .321 as well which led all NL outfielders. Not impressed? Well you should be.

In the AL Andrew Bailey shined from the ninth inning role with 26 saves in 30 chances. He had an ERA of 1.84 and got 6 wins from that closer spot. Pretty good for someone in his first season ever. 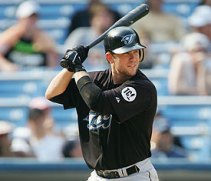 In the AL Aaron Hill went to the All Star game and won a silver slugger. What more can you ask for right? But he was coming back from a season ending concussion!
In the NL Chris Carpenter had an injury plagued 2008 and in 2009 he finished 2nd in the CY Young award ballot but really should have won it.

All these guys had fantastic, amazing seasons when it came to hitting. The guys who didn’t hit .300 had 30 homers. And the guys that didn’t have 30 homers had an average over .300. (Except Zambrano) See what I mean? 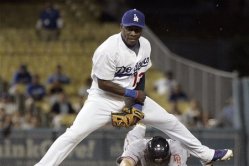 These guys kept making web gem after web gem. If it is Torii Hunter robbing a homer to Adrain Gonzalez covering home on a play that seemed impossible. But web gems weren’t everything of course. They all didn’t make errors when it seemed to matter the most. They made the big play when they mattered most.

Thank you, thank you, and thank you. All these guys deserved what they got. Most of them anyways…
<!–[if !supportLineBreakNewLine]–>
<!–[endif]–>

The 2009 NL Silver Sluggers have been announced, and Yankeeholics offers our heartiest congratulations to them. Here they are:

And now for our in depth analysis…

Brian McCann is the deserved winner of the Silver Slugger this year, posting a .281 average with 21 homers and 94 RBIs. He led all catchers in homers, was 14 RBIs ahead of the second placed catcher, and only Yadier Molina, who hit .294, posted a better batting average. Though McCann was also second in the league in strikeouts by catchers, his homeruns, average, RBIs, and slugging (1st in the league among catchers at .486, 44 points higher than second place) earned him the Silver Slugger.

Troy Tulowitzki put up a fight, but Hanley outdid him to take home his 2nd Silver Slugger award. Han-Ram led the NL with a .342 average, and his 24 homers were second among NL shortstops to Tulo (who had 32). Hanley also knocked in 106 runs (1st among NL shortstops) had a .410 OBP (again 1st) and a .543 slugging (2nd to Tulowitzki’s .552). Hanley had a fantastic season, and he richly deserves the Silver Slugger.

Andre Ethier put up good numbers this season, but we feel like Justin Upton edged him out. Though Justin Upton only hit 26 homers (5 less than Ethier) and only knocked in 86 runs (20 less than Ethier), Upton has a solid reason: he bats at the top of the lineup, while Ethier bats cleanup. At the top of the lineup, your job is not to hit homers and knock in runs; it is to get a hit and get on base. Justin Upton did that very well; he hit .300 with a .366 OBP, while Ethier could only manage .272 with a .361 OBP. Upton also edged Ethier out in slugging; .532 to .508. So despite the fact that Justin Upton knocked in fewer runs and hit less big flies, he did his job very well and his contribution to his team was better than Ethier’s contribution to the Dodgers.

As well as having a decent year with the ball, Big Z had a (relatively) great year with the bat, posting a .217 average with 4 homers and 11 RBIs. Those numbers were good enough to earn him his third Silver Slugger. Do we have a batting champion on our hands?

And that will wrap up the National League Silver Slugger awards! Thank you for reading and be sure to post your questions, comments, and opinions. Till next time!